We have both kinds of music here.... 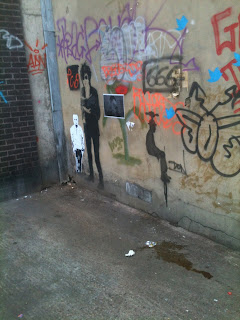 A quick walk round Brick Lane and a visit to Rough Trade East, I like the shop. I got that new Bowie In Berlin book, A New Job In A New Town. I'm really into that era of Bowie's work.

I remember going to a gig and seeing a jazz guitarist playing exactly like Derek Bailey. Talk about missing the point.

If you do try something new some people say "its unfocused" etc. Its outside their comfort zone and they don't like it.

"STORM THE CASTLE. BURN THE HERETICS!!"

I spotted this on a stall at the antiques market in Spitalfields: 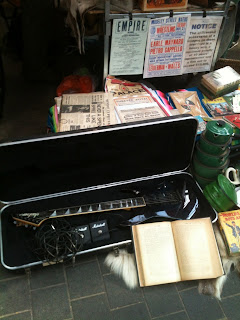 I remember when they were a symbol of the future, I used to read pointy guitar catalogues when I was at school wishing I could afford one. Weird seeing it amongst the antiquarian books and old music hall posters. Everything eventually becomes a relic of the past.

Sad but true, although I think it's easier now for the people with a genuine interest in the creative and experimental to connect with each other. I suspect we will always be a bit of a lunatic fringe…

With regards to my own experimental noodlings, I know when I am heading in the right direction when someone calls it "unfocussed". Ha!

..anyone fancy an experiment, come over the antfarm laboratories any time...white coat optional...leave all pre-conceptions at home with the misses.... antfarmstudios.com....