I think the future for bands is lots of musicians with small online fan bases, a few hundred or thousand. But small audiences do leave bands without the funding to tour or make posh sounding records. Which means no more weeks of recording in quality studios with expert technicians. Who's going to pay for it?  How would a band like Steely Dan who spent months in the studio survive now? 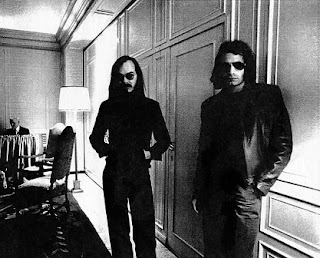 My friend Sid Smith made a good point in his blog about musicians from the late part of the 20th Century on his excellent blog - they worked:

And when they weren’t they working full-time in their communal houses, studios or Schloss, they were out touring.

I interview and talk to lots of modern-day players. Almost none of them work full time as musicians any more. There just aren’t the sales or the corporate support which the likes of Hillage, Baumann or Schmidt enjoyed that enabled them to give up their day jobs.

This is not to imply that there’s anything deficient or unworthy about the musicians of today. Far from it.

But as the hip commentators and freeium-toting futurologists cheer on the death of the recording industry, I can’t help but think something has been lost."

I think we are losing something.

Paul Simon making albums over a long period. Peter Gabriel, Kate Bush. Will we see people making albums like that again, to that quality. Who will pay the collaborators? I know technology has advanced so that one person can make a record but do they have all the skills required to make a GREAT RECORD?

So much of what I've done is based on good will, helpful mates and very kind contributions from talented friends I've met online. But how far can this go?