Y Prog Festival Cancelled, Are There Too Many Festivals?

The Y-Prog (or Why Prog? as my wife called it) Festival has been cancelled. In prog circles this was quite a big event, lots of well know bands and a decent amount of promotion. No official announcement but it looks like poor tickets sales did it. I don't know and choose not to speculate. Kris who was putting the festival on is a nice bloke and I've played with his band Manning, all very decent people. 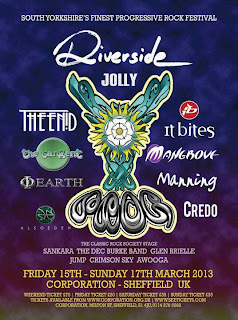 My beat combo The Fierce And The Dead were supposed to be playing. Balls.

It does make you worry that fans will choose not to come to these festivals in the future after being let down here - here are some posts from facebook and forums (names witheld as i don't want to invade anyone's privacy):

"I ordered my non-refundable airline ticket. There's no way I will spend £300 just to see Riverside "

"The train tickets are not (about £65), and I have to sort out the £70 weekend ticket, and I'll certainly be losing money on the admin charges"

"Having paid for my own coach tickets fom Inverness and hotel for weekend. I'm well and truely out of pocket (as both are non refundable)"

Are there too many festivals now? Too many similar line ups? Too many prog bands not enough fans?

I know we are lucky to allowed to play these events as we're not a "proper prog band" but it's a difficult time.

The very wonderful Electric Garden Festival is still only at 20%, please support it. It's a cracking line up:

Tonight I'm doing a warm up in London...

I certainly can't afford to go to every festival. Travel costs for me from South Wales make Y-Prog, Electric Garden & HRH a festival too far.

Celebr8.2 was announced far enough in advance to be able to get a travelodge room for the weekend cheap. I bought the tickets at the cheaper advance price. I still need to book my train tickets and this will probably be the biggest expense of the weekend but advance tickets from South Wales to London are a lot cheaper than tickets to places further north than Birmingham.

Y-Prog was probably killed by the close proximity to HRH Prog with many of the same bands.

I think a lot more vitriol needs to be targetted at the train and coach operators and hotel chains for making non-refundable bookings the only affordable option for many people. This really is a cynical corporate rip-off.

I've already ripped Laterooms.com a new arsehole for burying the cancellation policy in the small print, and I certainly won't be staying at any branch of the Copthorne hotel chain in the forseeable future.

Agreed, I can't afford it either. I tour with just bag and a guitar, in cheap hotels and often by train so i have to find the cheapest deal. If something gets cancelled it's a nightmare!

I was looking forward to that too. Balls.

There may be some comfort as we have bands willing to private hire both nights... not quite a festival, but at least you can see some prog!

Let's look at several factors:
a) Deepening recession - The Wesminster spin doctors have obviously never heard of the Emperor's new clothes! To make anything work nowadays you need to put at least 3 times more the marketing effort than you did 5 years ago.
b) Everyone is in a band - We've had probably 300 queries from bands wanting to play but nobody seems to have much of a fan base. This isn't necessarily the bands fault, more a social and cultural comment.
c) Linked to a) but petrol prices are now just.. well silly.
d) You have to give punters added value and interaction - in today's climate a passive festival experience just isn't enough.
e) There are too many prog festivals. In 2011 there was only really ourselves and the magnificent Summer's End. Fixed audience - bigger choice - limited disposable income.

In response to comment 1 (Mike Evans). I totally concur with the travel costs, that's why we made our tickets around half the price of the other festivals. That way the extra £15 can help you get here. The downside being that about a tenner of that will go into the government's coffers.