I didn't know Elton John was a Mahavishnu Orchestra Fan

I didn't expect to read this. From an interview with producer Ken Scott: 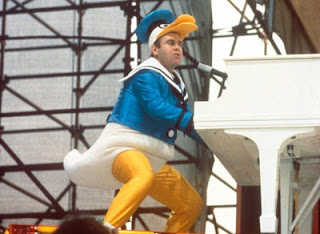 Q: I've often said, one of the ten albums I would take to the Island would be "Birds of Fire" by the Mahavishnu Orchestra. Ken, could you give us some recollections of the making of that recording ?
A: That was amazing. Well, lets see we first started off in England. I should give a little prep to this. When I was over in France recording one of the Elton John albums, it was a communal sort of dining room and so every night at dinner there would be some music playing and we would all be sitting at this long table eating. Well, Elton and Gus Dudgen were fans of Mahavishnu Orchestra's first album "Inner Mounting Flame" and that used to be playing. Now, I would catch snippets of the music when everyone sort of went a bit silent and then people would start talking again. And I just got the impression that it was a bunch of completely whacked out musicians each playing in a different studio-- no one quite knowing what was going on. I thought it was terrible. Then I'm back in England mixing the Elton album and I get this phone call from CBS and it's "John McLaughlin would like to meet you and they are coming over to England to do a TV show and he'd like to meet you with regards to doing the next album." My immediate reaction was "OK, send me over a copy of the album so I can sit down and listen to it properly" and was absolutely blown away. And then seeing them play live at the TV show took me even further. And then getting to work with them was amazing. We started it off in England and then finished if off at Electric Lady in New York.