In the recent excellent BBC David Bowie documentary one of the talking heads made a good point that "Bowie managed to visualise his success before it happened and not many people could do that".

Bowie, through his own belief and that of his wife and management was mentally already the rock star he was to become a few years later. Famously when Bowie first went to America his management acted like he was already a big star, spending money and riding around in limos. Bowie ended up massively in debt but this belief did pay off when the anticipated success did arrive. 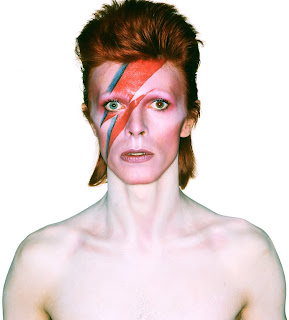 When you read about successful musicians (and people in general) a couple of things always seem to be consistent - a specific vision for their success and a belief in what they are doing. Whether it's Miles Davis changing jazz or Steve Harris from Iron Maiden's desire to be the biggest metal band in the world, vision does set people apart.

When I was  on a bus a while back i got talking to a man who got on next to me, and he was talking about "you reap what you sow". I think this is very useful advice.

Setting specific goals and having the belief in them does seem to very useful. However it's sometimes hard to get that belief.There is a lot of truth in that you can't be shown the way, you find it for yourself.

To truly have that sense of confidence and vision you need you have to feel you are already there, to trick your mind into it. Not easy, but faith once found will lead the way. The hard bit is convincing yourself.
Posted by Unknown at 05:47

Fascinating Matt, and I'm sure you are right. But one thing does bother me - you do see people who seem to have incredible self-belief and who are doing all the 'right' things (some of the people on The Apprentice and talent shows come to mind)but who really are not as special as they believe themselves to be. Self-belief and vision work best when accompanied by real talent and ability, and cannot be a substitute for it as some seem to believe!

Yup, very true, you can have all the belief in the world but if you're deluded and can't do the job....

I've seen so many talented people with no self belief thou.....