Glastonbury - Why All The Hate?

Reading Twitter last night there were a lot people getting irate about bands they hated or loved who were playing at Glastonbury. Especially the Rolling Stones.

The Stones aren't my sort of thing, but if it makes people happy good on 'em. One guy got quite upset when i said it wasn't my sort of thing, it's not aimed at me. It's not that I hate it, as Morrissey said "It says nothing to me about my life". It's not for me, i like Sympathy For The Devil and they're magnificent characters but I don't really get it. It's not like The Left Banke, Guapo or Bobby Conn are gonna be up there, I have wilfully obscure tastes and if you want to accuse me of cultural snobbery you're probably right.

I want Mahavishnu chords with Jellyfish singing, played with the energy of the Dead Kennedys. I would imagine a band like that would have quite a small audience. Just me and a few of my friends.

I'd rather talk about the music i do like than pissing about moaning about the stuff I don't get. I don't feel qualified to talk about a lot of this stuff, I haven't really listed to much popular music since i left HMV three years ago, except to say I think a lot of it seems a bit safe and the mastering makes a lot of it very flat. I have about as much interest in these bands as i have in toasters, ice skating or Scandinavian furniture. As you get older you learn to focus on the positive. 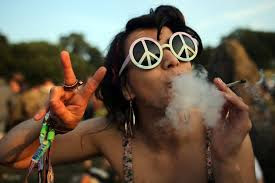 I can talk about lots of new stuff I love Trojan Horse, Knifeworld, RM Hubert, Dementio 13, Wilco, Marnie Stern, St Vincent and loads more. No one is forcing me to listen to Beady Eye or The Vaccines anymore so I don't get annoyed about it.

I'd still love to play at Glastonbury. I remember that all the brilliant wonderful stuff about the festival was NEVER on the TV (apart from the odd moment like Radiohead or Bowie). The interesting stuff takes part in the fringe weird areas with hippies off their heads at 4 in the morning in Tee Pees, where Ozric Tentacles could play at any moment.

One odd thing, my generation seemed to listen to more extreme music than the current one, that doesn't seem right to me. Where are the new Carcass or Napalm Death?
Posted by Unknown at 02:19

that was a good read, although I think that most people's reactions to it will be influenced by bbc3's presentation..
about extreme music - do you mean just at glasto? Or in general?

I am a Stones fan, but I am also wilfully obscure in my tastes. Or maybe I'm not. I prefer to just think of myself as a true lover of music, as opposed to one of these retards who goes "Weeeeeheeeeey" everytime a song that everybody knows comes on and leaps around to it like a drunken buffoon. As a dj since 1997, I've always experienced this behaviour from people, and it gets worse as time goes on.

Thus, I love to see the Stones live wherever affordable, but, I wouldn't have been interested in that many of the tunes they played last night. My dream Stones setlist would be full of album tracks from between 1967-80, and take place in some plush velvet theatre somewhere in the shade of a magic glade.

To me, knowing Stones obscurities is even better than knowing prog and psych obscurities- because at least this way you get to piss off the mianstreamers. Whereas if I tell people how great Fuzzy Duck or Warm Dust or Beacon Street Union or The Shoes are, nobody gives a shit.

That's actually the only thing I hate about Stones gigs- the audience. Always full of 'normal' people, who are clearly there for the prestige, and 90 percent of whom don't own a copy of Let It Bleed or Goats Head Soup.

I like the references to Jellyfish and Mahavishnu by the way.

I always watch Glastonbury because over the years I've seen some stuff that has become really important to me. I've also witnessed a lot of disappointing performances from bands I thought would be great. But I don't think Glasto can be said to represent the current music scene in any way, even taking into account the dozens of wonderful moments on the little stages away form the big crowds. I think festivals are leisure cultural events as much as musical ones - a weekend away with music - and that there's a place for crowd-pleasing sets full of favourites for people to jump around to.
As for young people listening to 'safe' and less extreme music - I suppose I wonder how we would know what young people are listening to? There could be all sorts out there that we just never come across.

Ooh - i like that - i hope there are some crazy tracks on instagram etc that we don't know about. Good point Yvette!

I most think much the Glastonbury hate comes from rock and metal fans, on the grounds that rock and metal are conspicuous by their near-absence on the bill.

Compare with recent bills at Roskilde in Denmark for example; alongside many of the same names we've seen at Glastonbury you'll also see names like Iron Maiden and Judas Priest, whose appearance at Glastonbury would be unthinkable.

Eavis has previously cited crowd safety concerns for banning rock and metal from the festival, but I think that's bogus. Download can pass off safely year after year with an entire bill of hard rock and metal.

I listen to all sorts, but Matt, I agree, the Stones don't quite shake my tree, but Life by Keith Richards is a great read nonetheles. And I love his approach to the guitar. 5string open tunings. As a Saffer my chances of making it to Glastonbury is small, but I'd.probably see it for the novelty of seeing the Stones.

I also like left of centre bands, like this British guitar player bloke, Matt Stevens and a band called The Fierce and the Dead. You've probably never heard of them, but I found the Matt guy on myspace when that was still cool.


I'm especially intrigued by guys doing their own recordings and not having the constraints of record companies and mandates and directives other than doing whatever the heck they want to. Jack White is becoming like that in a major artist kind of way. Some of it can be pure trash, but some of it is sometimes completely kiff.