You know i was telling you about doing a few special gig? This is at the Unicorn in Camden - The legend that is Twang "After a meeting in a car park at Midnight, both wearing trench coats and using code words like, 'The Aardvark's head

is tilted to the left'. 'Yes it can see better whilst frying bacon'. (One cannot be too careful these days) I am extremely happy to announce that I have managed to persuade MATT STEVENS out of Solo retirement to recreate the STUNNING CELEBR8 show with some brand new material! And I can tell you that it's FREE ENTRY!!!

The First House of Progression show to be announced for The Unicorn Camden...........I thought I'd go for a Guitar God!! Supertramp's Guitar God at that!!

‘One of the TOP 10 Guitar players in the WORLD! ’ Guitar Magazine

‘One of the Top 100 Guitar players of ALL TIME’!Classic Rock Magazine 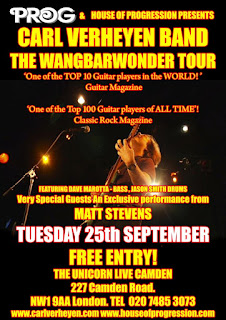