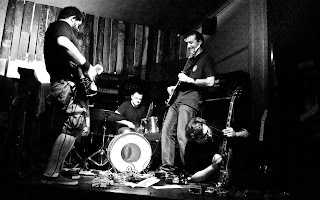 Fierce And The Dead Rehearsal.

My whammy pedal is knackered and as that is the pedal i use all over the On VHS EP it rather limits what we can play. Shite.

What we did do was rearrange some of the songs to make them easier to play live. I've taken on too many of the guitar parts and now we've split them to between me and Steve, the other guitarist. Makes my life less about leaping from one pedal to another and more about actually playing the songs. Brilliant. On some sections previously i had to hit 2 pedals at once to get different sounds. Bloody nightmare.

Kev is a great arranger of parts and he did a lot of work sorting it all out.

Anyway we did that then wrote some new stuff. Big riffs. But you'll hear all about that soon.
Posted by Unknown at 13:02